on November 30, 2017
Let me tell you about the first time I stumbled upon this Nightmare of a movie. It was the same year that Lance Bass said he was going into space. So naturally since I was in love with him I was concerned. So I was at my friends house having a sleepover and she’s like oh you’re interested in space we should watch this space movie on Cable. I clarified I was not INTERESTED in space, but scared of it. She convinced me it wasn’t that scary. Sam Neil is in it , and he’s Merlin! There were other people at the sleepover, and I didn’t wanna be a weenie. So, I watched the movie. The girl was right, it wasn’t scary, it was horrifying! So horrified, I blocked the experience out completely until recently.... I forgot all about Event Horizon. 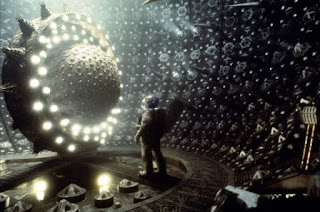 While searching for a lost film to write about, one of my friends suggested Event Horizon. She told me the film wasn’t lost but a good chunk of the movie was cut out. If you’re wondering, it’s not the same friend that made me watch the movie in the first place. Now, I do have a real problem with nightmares. It’s because my husband likes our bedroom to be cold, which makes for uncomfortable sleep for me. I know it’s considered an old wives tale, but I think it’s true for me! The recurring nightmare I have most often is me gouging my own eyes out. I obviously watch a lot of horror movies, but I couldn’t pinpoint how that particular image entered my psyche. 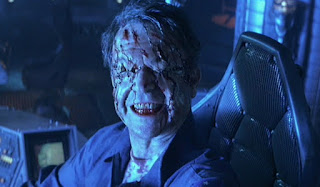 You could imagine the chuckle I got when I found the source of more than a decade of bad dreams. It was actually nice to see because now that I know it’s a movie, it’s easier to let myself know it’s just a dream.
My rewatch of this movie was interesting. I think the special effects aren’t particularly dated. Which is almost unbelievable, because it is after all, a 90’s movie. Now that I am significantly more versed in film, I kind of feel like Event Horizon is Alien, 2001: A Space Oddesy, Solaris, and Hellraiser put into to a blender. And the ending is a clear shout out to Carrie. This isn’t a criticism. I feel like director Paul W.S. Anderson truly loves these movies/the genre and this film is an incredibly gory love letter. The score is ahead of it’s time, atmospheric and spooky af.
Also, in addition to Laurence Fishburne and the aforementioned Sam Neil, Jason Issacs is in this movie too! As a Harry Potter fan, I love seeing the actors in other movies. He plays Lucius Malfoy.

The movie isn’t perfect, and I think it’s because the editing is bad. The director didn’t have enough time to properly edit the movie. I didn’t think it was possible for a movie to have pacing issues and STILL leave too much out. But, I learned today! Event Horizon is a starship that went missing. The film takes place in the future, when Event Horizon is found close to Neptune. The starship sends out a distress signal and a crew goes aboard the Lewis and Clark starship to see what happened to Event Horizon. The crew creates a black hole to travel through in order to shorten the time it takes to get to Neptune. When they reach Event Horizon, the starship looks like something really bad happened. Then, all Hell (literally) breaks loose. My point isn’t to spoil the film, I want you to watch it for yourself! My point is, this movie that is indirectly responsible for so many nightmares was originally longer! So much stuff was cut out because the director didn’t want the film to be rated NC-17. The complete movie is 2 hours and 10 minutes. The movie that was released was 136 minutes long. Back then, DVDs weren’t really a “thing”, so it wasn’t common to keep extra footage. Especially for movies like Event Horizon that flopped at the box office. What was able to be recovered, is mostly intense body horror....like almost worse than something you would see in a Cronenberg film. Funny enough, the deleted footage was recovered in a salt mine located in Transylvania (!!!). That footage had deteriorated over time, also because it was in a salt mine. The footage was considered lost forever.
Well...lost until 2012. In a Comic Con interview,Anderson said the film’s producer Lloyd Levin found the original cut of the film on a VHS. Unfortunately, that’s the most recent update I was able to locate. I was fortunate enough to find a few deleted scenes floating around YouTube. If you purchase the DVD, they are also available on there! Some of the scenes include:
👨🏾‍🚀A mutilated Weir going down a ladder in homage to the (also) deleted spider walk scene in The Exorcist
👨🏾‍🚀A longer version of the “blood orgy”, complete with actual porn actors and actresses.
👨🏾‍🚀Two alternate endings. The ending used is a mix of the unused endings
👨🏾‍🚀Scenes explaining what the gateway to Hell actually is.
I was thinking about sharing them here, but they’re honestly such terrible quality that I don’t feel comfortable with it on my blog. I’m a writer, and sometimes my friends ask to read the stuff I cut out of my books. It makes me uncomfortable because the chapters are usually unedited, or me typing short hand, or worse, my Charlie Kelly-esque “handwriting”! If I was going to show recovered footage, I would want them to be in good quality. If you watch the recovered scenes online, you can see they are fuzzy, low to no volume, or have markings on them from the editing process. I prefer to wait until the director gets around to releasing what he wants us to see. Earlier this year, he said he gave up on it. Then later, he said he was going to watch the VHS. So, there’s still hope! 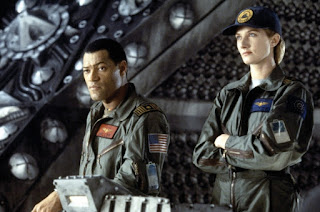 Fun facts about Event Horizon I found online:
👨🏾‍🚀The design of the Event Horizon starship was based on the Norte Dame cathedral in France! When the towers are folded out, it’s in the shape of a crucifix. If you look carefully the halls are shaped like coffins
👨🏾‍🚀The story is slightly inspired by The Flying Dutchman
👨🏾‍🚀Clive Barker, most famous for Hellraiser, was a consultant on the film. I think you can really see his influence. Especially with the ship’s core. It looks like the Lament Configuration!
👨🏾‍🚀The ship’s core looks like it’s made of metal, but it’s actually painted rubber.
👨🏾‍🚀I think what scared me the most as a child was that “Hell” was accessible via space! For some reason, I already thought Hell was in space (I’m not gonna go into detail because this isn’t a religious blog lol). Anyway, this movie confirmed my childhood fears. Luckily, I got over my space fear in time for Revenge of the Sith. Star Wars cured my nonsensical space phobia!
👨🏾‍🚀Speaking of Star Wars, the model of the Event Horizon includes a complete "X-Wing" as part of an antenna array. The model is visible on the lower portion of the Event Horizon during the first flyby by the Lewis & Clark.
👨🏾‍🚀Kurt Russell knew people would appreciate the film in the future. He said, "Forget about what this movie's doing now. In fifteen years time, this is going to be the movie you're glad you made". For the record, I’m writing this twenty years after it was released!
👨🏾‍🚀The ship's central corridor has the shape of an eye, to symbolize that the ship is always keeping watch of its victims.
👨🏾‍🚀Phillip Eisner pitched the movie to the studio as “The Shining in space”.
👨🏾‍🚀Everyone's space suit has a flag showing future political changes on Earth. Characters portrayed by American actors wear a flag of the United States with 55 stars. Characters portrayed by British actors wear a European Union flag with 22 stars, replacing the former Union Jack. Wild, because this was obviously before Brexit!
👨🏾‍🚀The Event Horizon was named after the theoretical boundary surrounding a black hole, within which gravitational attraction is so great that nothing, not even radiation, can escape because the escape velocity is greater than the speed of light.
Stay Spooky, Nik
Event Horizon Lost media throwback Thursday